In line with its responsibilities under the Indus Waters Treaty, the World Bank has made the appointments that it was mandated to make in the two separate processes requested by India and Pakistan in relation to the Kishenganga and Ratle hydroelectric power plants.

The two countries disagree over whether the technical design features of these two hydroelectric plants contravene the Treaty. Pakistan asked the World Bank to facilitate the establishment of a Court of Arbitration to consider its concerns about the designs of the two hydroelectric power projects, while India asked for the appointment of a Neutral Expert to consider similar concerns over the two projects.

Mr. Michel Lino has been appointed as the Neutral Expert and Prof. Sean Murphy has been appointed as Chairman of the Court of Arbitration. They will carry out their duties in their individual capacity as subject matter experts and independently of any other appointments they may currently hold.

The World Bank continues to share the concerns of the parties that carrying out the two processes concurrently poses practical and legal challenges. The World Bank is confident that the highly qualified experts appointed as Neutral Experts and as members of the Court of Arbitration will engage in fair and careful consideration of their jurisdictional mandate, as they are empowered to do by the Treaty. 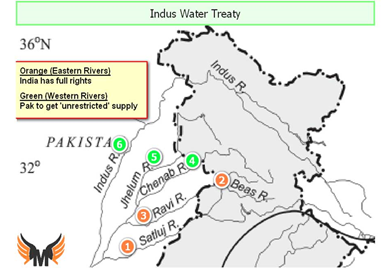 What is the Dispute all about between India and Pakistan?

To stop the flow of the waters that belong to India for its utilization in India, the following steps have been taken:

Previous article“Unvaccinated are Superheroes” – A Letter from French General
Next articleBREAKING NEWS: BBMP is yet to confirm any infection of the new XBB variant of Omicron.

Won’t back down till PM agrees to discuss Hindenburg-Adani in Parliament: Digvijay

Ankara: As condolences poured in from world leaders after a deadly earthquake shook Turkey and Syria on Monday,...
India

Hyderabad: Three Lashkar-e-Taiba terrorists who planned the blast in Hyderabad were arrested. The accused are identified as Mohammed...
World

Dhaka: As many as 12 Hindu temples under Balidangi Upazila in the North Thakurgaon district of Bangladesh were...
World

California: An employee who was recently fired from Facebook has come up with shocking facts about how the...

Comprehensive, up-to-date news coverage, aggregated from sources all over the world by Qvive News.

Ankara: As condolences poured in from world leaders after...

Hyderabad: Three Lashkar-e-Taiba terrorists who planned the blast in...

Dhaka: As many as 12 Hindu temples under Balidangi...

A New Mexico man has made a series of...

Para Athletes ‘Ride for Unity’ from Delhi to Kathmandu, bikers will cover distance in retrofitted scooty

New Delhi: The indomitable spirit of persons, the prowess...

Here’s how Sonia, Manmohan, Modi, Left and others sold out India to Bill Gates and other Globalist criminals and are Conspiring to Enslave 135...

Rajiv Gandhi Charitable Trust (RGCT), which is chaired by...